Taking a drive on this long missed sunny day.

It’s official. I am publicly admitting I have a problem. The problem is this; I can’t get enough of this stuff. I know what your thinking; Chef Marc”Just do funnels” right? No friends doing funnels is not the answer. First off theres the problem of the nose. . Ding ding ding you got it the nostrils. The nostrils are going to get the full brunt and Stingy power of whatever you’re doing in a funnelish way. Remember, The whole path of least resistance thing? That and the fact it just doesn’t look very dignified, The only person that I’m aware to date that can actually do a funnel in a graceful, debonair, if not in a metallic GQ kind of way would be ; “The Tin Man” from the wizard of Oz. Chances are though the Tin man would be more likely to be doing 40’s of WD, rather than internally rusting to a halt, from my some what obsessive citrus induced water preoccupation. Why do I like it so? It’s got a clean, crisp lemon flavor with a perfectly understated sweetness to it. If Sanpellegrino ever makes kegs of it’s fruit endowed sparkling libation I shall surely have a fortress made of it ( we’ve hide the names of the flavor to protect the fresh innocents of the other fab fruity flavors) . Tune in next week when we discuss the the virtues of wearing aluminum foil undergarments near microwave ovens (kidding)….;)

Why so blue adorable pink Bunny? I’ve been there Pal (see crazed tiger stage right) and totally sympathize. Cheer up my fuzzy little critter cuz, because? There’s light at the end of this Pisher Price tunnel and it’s called the “Fuzzy Boomerang”. (no kid, not duzy boo boo aang) It works like this; first, you need to wait till you folks are old enough to be ever so slightly roughed up but not so much as to traumatize them into standing in front of your childhood home barking like a Shitzu.
Next you’ll need get a van. Preferably one that is high enough to keep from hitting their head but low enough as not to throw a hip or cause a hernia, or or break your dam iPhone in your back pocket with your “Buns of Steel” again.
I recommend making the extra effort and investment of procuring bubble wrap and packing peanuts. To fill the van prior to tossing folks in. I mean come on they are you folks so take the extra care with them.
When the van is prepped and ready call the restaurant to make the reservations. Try to make them at the nearest and preferably the best (good luck finding a good place never mind the best) “all you can eat” buffet. Why an all you eat buffet? Because they’re like a warm Kryptonite sleepytime hug to parents (non lethal ).
Like drunken bees they’ll just kind of aimlessly roll around going buzz buzz we’re drunkin bees he he he. They are now harmless with all defenses deactivated so act quickly.
Now is not the time to dilly dally. As everybody knows the effects of an American Asian styled buffet are temporary and will were off in 15 minutes maybe less. Unless they hit the dessert section twice then tops you’ve got 23 minutes before they get hungry and snap out of it.

Once thrown into the van (enlist siblings and cousins who’ve gotten similar “Christmas Story-ish” wearable gifts from them to help) Take shoes off by rapidly unlacing, making use of a shoe horn can only help in picking up the pace . In most cases the “Shoe removal” part of the show will just simply be the task of unfastening two Velcro straps in one skilled motion. Once shoes are off slide on and secure oversized Bunny outfits you and your extended family made at your quilting sessions at the local community center. Send copies of your pictures to CNN ‘s AndersonCooper with the rest to be used for annually mailed out Christmas/Holiday cards till they run out or the Governor grants a pardon. 😉 kidding of course. Love ya Mom&Dad.

Picture of bunny kid on swing in left picture is from http://www.imfunny.net 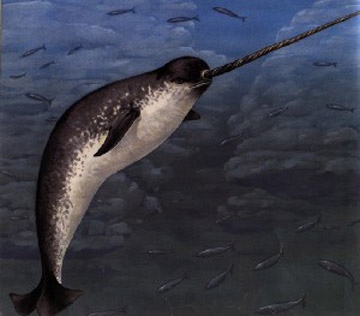 Poor Narwhal Never Saw It Coming. Earlier today at ICMUT( institute of chubby mammals with unicorn thingies) a crazed man wearing a Panda jumpsuit ran passed security then leaped into the air executing a flawless “Triple Lindy” with a reverse “Howda Ya Do”, landing in a relaxed straddle position on the unassuming Narwhal sunbathing. When asked way he didn’t stop the man the security guard said: “I didn’t think Pandas could run that fast without wobbling and turfing it. ” After Years of counseling and harnessing the power of positive affirmation (“tea bags are my friend. They make yummy drinks”) Narley as his friends would call him, was seen recently happily working at a Churrascaria in NYC. Seemingly happy and well adjusted from the ordeal from years past. Words to steer away from though to avoid twitching and other flailing about when conversing with Narley are: straddle, cattle, rattle, and for some reason Fennel. ( idk lol). Picture from: http://lisanelsonnd.com/Per2/Arctic%20Animals/narwhal.html

From time to time I’ve had hardened criminals working at my pot sink and at other duties. I remember asking a one of them a question. Getting the answer from them. Then me telling them with a voice of authority, “Pinky Swear”. They replyed; Wut!!. I said; Ya heard me. Pinky Swear Bi+ch! The spider web covered, teary eye inked gentleman gleared a look back at me with sun furrowed face and eyes. Apparently in squinty stare down chef mode. I look dead pan right back at him.

A long Elevator music pause ensued as we looked at each other, minus the music. He tilted his head to the left, like a confused dog listening to everyone on that side of the planet. Then just before I wrenched a butt cheek I had been clenching, he roared with laughter. Casting out with great force from his lungs what could been his first cigarette smoked at the age of two. The Potwasher shaked, flailed and wheezed in another full breath of air just to bellow it out in thunderous laughter again. His Laughter sounded like a monk chanting deep, powerful resonating tones. Affecting in a postivetive mannor all things it came in contact with. Then, I laughed and said” whadda laughing at?”, as I passed by him with a wink and a chuckle. The End 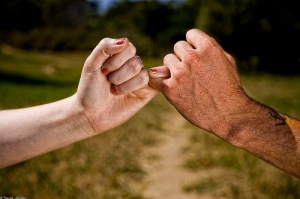